Organized mostly in chronological order, this book is a 40-year retrospective of Reyes Cárdenas’ life and work written from 1970-2010.

The book is divided into the following 11 sections: Selections from Chicano Territory (1970); Los Pachucos y La Flying Saucer (1975, the only novella in this anthology, originally published in Caracol magazine); Selections from Anti-Bicicleta Haiku (1976); Selections from Survivors of the Chicano Titanic (1981); Elegy for John Lennon (1982); Selections from I Was Never a Militant Chicano (1986); Homage to Robinson (2008); The Collected Poems of Artemio Sánchez (2009); Meeting Mr. Incognito (2010); Poems from chicanopoet.blogspot.com (2004-2010); and From Aztlan to the Moons of Mars: A Chicano Verse Novela (2010). Of the eleven sections, five are selections from previous publications, and six are new, never before published collections of poetry. 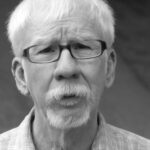 Reyes Cárdenas was born on January 6, 1948 in Guadalupe County, Texas. He has lived most of his life in Central Texas, while making a living as a machinist.