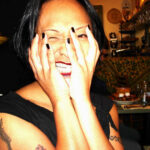 Barbara Jane Reyes was born in Manila, Philippines, and raised in the San Francisco Bay Area. Her poems, essays, and reviews have appeared in numerous magazines and literary reviews, and she is the author of six books including Diwata (BOA Editions, Ltd., 2010), which was a finalist for the California Book Award, and Poeta en San Francisco (Tinfish Press, 2005), which received the James Laughlin Award of the Academy of American Poets. She has taught at Mills College, and at University of San Francisco Philippine Studies Program, and is the Co-Editor of Doveglion Press.