Set in a not-so-distant dystopian future, La Madre Valiente, a refugee raised under the oppressive State, studies secretly to become the leader of a feminist revolution. Her emissaries, Las Hijas de la Madre, roam the land spreading her story, educating others, and galvanizing allies.

The much anticipated second book by award-winning author and performance poet Amalia L. Ortiz, The Canción Cannibal Cabaret & Other Songs is a hybrid manuscript experimenting with poetry at the intersection of performance. As a text, it is a collection of post-apocalyptic prose poems and poem songs “cannibalizing” knowledge from before the fall of civilization. In performance, it is a Xicana punk rock musical—part concept album, part radio play. Inspired by current issues of social injustice, this book is a refugee, people of color, feminist, and LGBTQ+ call to action.

Shocking and jolting our sense of what is poetry, what is political poetry, these pieces impel us to take action. They are wild horses running and bolting across the page but with a sense of purpose and direction that lead us to consider our own courage, or lack thereof. We ask ourselves, ¿somos valientes?
—Dr. Norma E. Cantú, Trinity University Norine R. and T. Frank Murchison Endowed Professor in Humanities. Author of Canículas and Transcendental Train Yard.

Ortiz’s figure of the revolutionary leader “La Madre Valiente” harkens a genealogy of mujerista women—from Rosaura Revueltas in Salt of the Earth to Alice Bag—with a style of prose comparable to the Born in Flames soundtrack. The author destroys strict definitions of punk rock rebellion and tests everything punk lovers have taken for granted as white. This collection of Herstory lessons and poetry is a sincere love letter to Xicana punk and is, in many ways, a contemporary songbook for our already post-apocalyptic political climate.
—Punkera Scholar, Dr. Marlén Ríos-Hernández, PhD Ethnic Studies, UC President’s Postdoctoral Fellow at the University of California, Los Angeles. 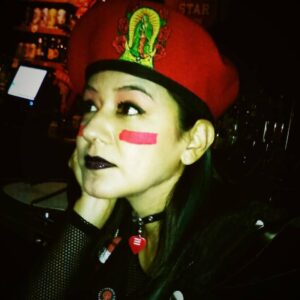 Amalia Leticia Ortiz is a Tejana actor, writer, and activist who appeared on three seasons of Russell Simmons Presents Def Poetry on HBO, and has toured colleges and universities as a solo artist and with performance-poetry troupes Diva Diction, The Chicano Messengers of Spoken Word, and the Def Poetry College Tour. Her debut book of poetry, Rant. Chant. Chisme., (Wings Press), won the 2015 Poetry Discovery Prize from the Writers’ League of Texas Book Awards and was selected by NBC Latino as one of the “10 Great Latino Books of 2015.” A CantoMundo Fellow and Hedgebrook Writer-In-Residence alumna, she received the 2002 Alfredo Cisneros Del Moral Foundation Award, which was founded by Sandra Cisneros, and her poem “These Hands Which Have Never Picked Cotton” was nominated for the 2012 Pushcart Prize. Her MFA is in Creative Writing from the University of Texas Río Grande Valley.